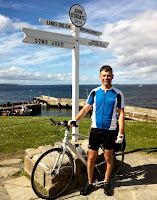 It's a strange feeling now that it's all over. Apart from the physical aspects (like a very sore arse and achy knees) there isn't really anything that shouts out "I Cycled from Land's End to John o' Groats!" My bike is back in the shed, awaiting a thorough clean and service and my bags are in the corner of the bedroom waiting to be sorted, clothes washed and bits tidied away. I feel different, although it's hard to explain exactly how. I've experienced things I hadn't done before and pushed myself, both physically and mentally to extremes that I hadn't known existed. I feel calmer, relieved and a bit humbled.

What would I change if I was to do it again? Well, first of all, I'd stay off that damn stupid A30 between Penzance and Exeter. That was definitely an accident waiting to happen. The same goes for the A9 in Scotland. No no no no no! or should that be Noo noo noo noo for the A9? Again, I took too much kit. Not as much excess as the Leeds & Liverpool Canal ride but still, I could have done without one of the jerseys, socks, boxers, hair gel. I binned some of it on day one! The hair gel, half of the toothpaste, sun cream (If only I'd known how much rain i'd get!) and the two bags of sweets all went before I started, meaning 1kg less to carry. Otherwise I think I got my kit more or less spot on.

My mileage averaged at 111 miles per day over eight days. That really did push me to my limits in the conditions I was enduring. To be riding in constant, often torrential rain for seven out of the eight days was demoralising to say the least. There were more than a few occasions when I would have gladly dumped the bike in a ditch and thumbed a lift to the nearest railway station! Whether the miles would have been easier in good weather I don't know. If I do an event like this again, I will definitely drop my daily limit to about 70 or 80 miles a day.

I am very happy with the way my bike performed. It was comfortable, relatively light (10kg) and I had no mechanical problems whatsoever during the entire ride. I had one puncture on t

he first day, but the staple that went in wouldn't have been prevented by anything. Even though the bike had a daily soaking it rode just as smooth after a spray of WD40 and some chain lube. Click Here to see the bike I used, including the additions and changes to make it LeJog-proof.

The one piece of equipment I could not have done without was my iPod Nano. This tiny miracle saved my sanity! Through days of torrential rain, knee pain, loneliness and sometimes fear! My Nano was there to keep me company. Sometimes it would play something that would make me burst into tears and other times I would be screaming my head off while coasting down a hill at 40 mph!

Overall I would say that it was an experience of a lifetime, but one that I won't repeat. Not because I didn't enjoy it, although I can't say I enjoyed it because it rained so hard all week that I struggled through most of it! I've done it now and once I've done something I like to move on to the next challenge. Had it not been for the rain I would have been able to take in the sights and beauty of the country I was cycling across. What I will say is that I don't regret doing it because I did get a lot from the experience. Would I recommend it to others? Definitely!
Posted by Colin Dobson at 14:55