Day One - Land's End to Okehampton. 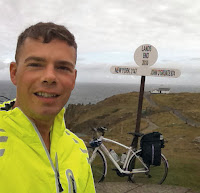 I didn't' sleep very well last night and I was wide awake by 6am. A combination of nerves, excitement and anticipation. The heavy rain was continuing when I drew the curtains, disappointed that my first day would be a wet one. After showering I had to re-pack the bike bags due to one side been heavier than the other. It caused a few wobbles on my cycle from Penzance yesterday. After breakfast I double checked everything and was waved off by the owners of the B&B. It was only a 5 minute cycle ride to Land's End and I was surprised how commercial it is, full of shops and minor attractions. A bit like Blackpool but only one building! It was however, empty. Everything was closed and the only people I saw were a group of French cyclists who were just setting off as I arrived. I waved to the first few but after getting a dirty look I ignored the rest. They were on high spec race bikes with bright, sponsored jerseys and a support (nanny) vehicle following them.

So there I was, all alone at the Land's End sign, overlooking the cliffs and crashing sea. It was spitting with rain, made worse by the 50 or 60 mph gusty winds. I took the obligatory photo and sat on the saddle for a moment thinking 'oh well, this is it then, here we go!', before pedalling off. Despite the rain, the wind was from the South West and it gave me a helping hand the whole day. The first ten miles to Penzance flew by and I soon had my target average speed of 15 mph. It was very hilly though. Short, sharp ascents and descents, but not too much of a problem at this early stage.

After leaving Penzance the A30 suddenly becomes very busy, another lane appeared and the traffic gets faster! After talking to other people who have used this road, the advice wa 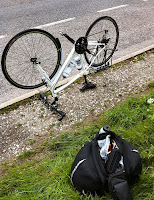 s to use the mini-hard shoulder. At only a foot wide in places it really is 'mini'. I soon established that this safer alternative was covered in glass, stones, flints and other bits of road debris. Unfortunately, the alternative was heavy traffic moving at upwards of 90 mph. I decided to take my chances with the hard shoulder, after all, I had puncture resistant tyres fitted. These sort of tyres can only do so much and I soon found that out when I suddenly felt the bike wobble while coasting down a hill at 36 mph. The wobble turned into an uncontrollable shaking and the bike veered off into the first lane of the road. I heard a lorry brake sharply to avoid hitting me and within a second or two I had gotten the bike under control and slowed to a stop. The culprit was an industrial size staple lodged right through the tyre and tube.

So, my first brush with death and only 60 miles into the trip. I decided that I'd take my chances with the traffic instead. I put my very hi-vis jacket on and stayed on the main road. I stopped at Fraddon for

some lunch at McDonalds before heading off the wrong way and having to do a 2 mile detour to get back en-route! The wind was picking up and the rainclouds starting to gather behind me. I was still 30 miles from Okehampton and the A30 was getting frustratingly busy. Not a good time to be getting blown into the path of traffic by strong gusts of wind! More than once I got beeped at and some obscenity shouted at me from behind the glass. I couldn't help it! The winds got hold of my bike and threw me up to a foot or two into the road. It was only luck that prevented me from being hit.

Finally, after a final big climb and wet descent, I arrived in Okehampton. To say it was raining is an understatement. Once I dropped my stuff in my room I walked the 500 yards to the local supermarket only to get soaked to the skin. I had to spend the rest of the evening naked in my room, drying my clothes with the hairdryer! My advice to anyone doing the LeJog is to definitely avoid the A30 between Penzance and Exeter. It's okay from Land's End to Penzance but it just not worth the risk from there on.