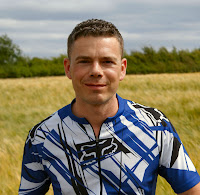 Writing this is a bit like when you're at the Doctor's, trying to think how to describe that lump on your left bollock that you are convinced is going to kill you, and the Doctor just looks at you like a pillock.

So... well... about me; I'm just an out of the ordinary bloke, still ten years old in my head but my body is winning the fight to grow old, despite the lashings of Olay and Dove that I slap all over it. For years I tried to fit in with the norm, keep a steady job, paint everything magnolia and drink beer. Now I'm starting to realise that there's no point in trying to fit in. I'm me and I don't like what most people like, and most people don't understand what I like. So I'm slowly coming round to the idea that I should be proud of what I am and make the most of my interests, enjoying every moment.

I've always liked cycling. It keeps me fit and sane for a few reasons. back in 2008 I first came up with the notion of cycling from Land's End to John O' Groats for charity. I bought a bike, loads of gear and about two grand later discovered that my left knee wasn't up to the job. Feeling a bit stupid and let down, I sold the bike and gave up on the idea for a few months.
In 2009 I had a thought. The biometric problem that caused my knee to hurt was caused by the position and riding style of a road bike. I could ride for miles on a mountain bike without a problem. So in  August 2009 I set out to cycle the entire length of the Leeds & Liverpool Canal. 127 and a quarter miles there and the same back. I completed the route in 22 hours, a record time.

Since then, I've got more confidence and studied the causes that stop me from road biking. I've got myself a very nice Hybrid Sports Road Bike which causes me no knee problems. So the LEJOG is back on!