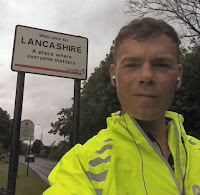 After the shock of my knee injury yesterday I was wary about what today would bring. Deep down, I knew in my mind that today would decide whether I was able to seriously consider the rest of the journey. My confidence was low, the rain was already falling, again, and I wasn't expecting a good day. It's a good job people don't pay me to make predictions! The rain was on and off during the morning but my knee felt tons better! Unlike yesterday, the miles were flying by and before I knew it I was making my first 25 mile break. I'd come from the Shropshire / Cheshire border, through Nantwich, Middlewich and Northwich all in the space of under two hours. Fab!

The miles continued to fly as I raced through a quiet Warrington and towards Wigan. With my iPod blasting my Pet Shop Boys songs I was singing, or screaming, depending on your opinion through the streets of Wigan, attracting stares and several comments that I couldn't hear over the music! 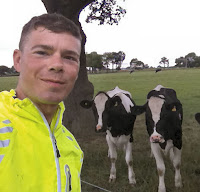 With 55 miles done and the rain, once again, starting to get heavier and more persistent, I stopped by a bus shelter and had lunch, several cheese sandwiches, very kindly prepared by the B&B owner from last night. A young lad walked past me smoking a joint. I would have swapped my Desert, a Wispa Duo, Caramel and a 500ml bottle of water for that joint! Refuelled, I was ready to polish off the last 50 miles, hopefully as well as the first 55.

You see, I did it again! I got confident and the big man in the sky thought "sod you matey" and turned the cold water taps on. I'm serious! I didn't know it but a weather warning had been issued for up to 75mm of torrential rain and I was heading straight into it. From Preston, through to Lancaster and onto Kendal, for over three hours it rained, and rained, and rained. Torrential is an understatement! Just as luck would have it the climbs started as well. Not too steep or long but enough to have me spitting and swearing at cars who were drowning me in their wake.

I arrived in Kendal at 5.15pm looking like a drowned rat on a bike. As a treat, I had booked a nice hotel to mark the halway point. The bad news was that the idylic riverside view had turned into a flood waiting to happen! I'm now halfway to John O' Groats but the real hills start tomorrow!
Totals for the day:
Miles: 104.8
Average Speed: 14 mph
Maximum Speed: 29.7 mph
Total Ascent: 2202 ft
Calories Used: 6444