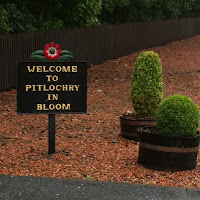 'Welcome To Pitlochry In Bloom' said the sign. More like welcome to Pitlochry in FLOOD! Today is Day 7 of my journey and it has rained every day so far. The rain started yesterday afternoon despite a forecast of dry, sunny weather. It continued all of last night and the area around Pitlochry (Perth & Kinross) had the worst floods for over 17 years! As you can see by Clicking Here many roads were closed in the area. By Wednesday morning, most of Pitlochry was cut off by the flood waters. All road and rail routes were flooded and I had no idea how I could escape the village. I went down to breakfast at 8am and was on the brink of tears again. I felt so depressed. The rain had been more or less constant since I set off last Thursday. Every day I had gotten soaked to the skin and for what? To finally get stopped in my tracks by flooding. The breakfast itself was gorgeous! Cooked to perfection, and the staff, who could see my obvious distress waited on me with a little extra attention, reassuring me that this would be okay, that the roads would be open very soon and that I would be on my way in no time. It was an excuse for second helpings and another round

of toast!
I called Shaun from my room and more or less said that it was over. He started crying, which started me crying and it was like Worcestershire last Saturday all over again. The tears released frustration and built up stress. As if by magic, the rain eased a little and I got news that the A9 had re-opened. It wasn't perfect, and it would be dangerous in the rain, but it was my only way out of Pitlochry and the only way I was going to get closer to John o' Groats.
Once again the computer wasn't working due to the he 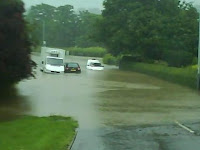 avy rain yesterday. It wouldn't matter too much as long as I stayed on the A9 as it would take me directly to Inverness, 97 miles away. I thanked the hotel manager for his help and pedaled off towards the flooded road at the bottom of the hill. Even then, I had to wade through water a foot deep to get on the only road open, the dreaded A9! The road itself had been closed to to damage caused by the flood waters racing off the hills. (see pic). The rain was still falling and I had nothing but dread for the day ahead!
Today's route took me across the Cairngorms. What should have been the most beautiful section of the ride , but once again spoiled. Masked by rain, low cloud and the spray from cars and lorries thundering past me at stupid speeds. For almost a hundred miles I was concentrated on a spot, two metres in front of me as I pedaled for my life. No wonder I got such a decent average speed today. Fear and desperation are a good motivator! Inverness could not have come too soon. I was cold, wet, depressed and had given up all hope of finding a quiet B road to make the day somewhat less stress full. From Inverness I knew it was only 17 miles. If I tried really hard I could be in the warm, cosy B&B in just over an hour. It took two hours but never mind!
Totals for the day:
Miles: 110.7
Average Speed: 14.1 mph
Maximum Speed: 34.1 mph
Total Ascent: 3583 ft
Calories Used: 6823
Bike route 583238 - powered by Bikemap
Posted by Colin Dobson at 13:20