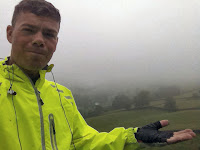 When I woke up my instinct was to look out of the window at the river, which the evening before had been rising to within a few feet of my hotel window. This morning it was a foot away and it was still raining. I really wanted to stay in bed with the thought of the two highest climbs of the entire trip coming today but at 6.40am I knew I had to get up if I was to have time to get my bag repacked, grab breakfast and make a start on those hills. My clothes had dried out from the night before thanks to the towel rail in the bathroom. I relined the bags with bin liners to try and stop rain penetrating through the covers as had happened the previous few days.

I peddled out of the hotel at 7.30am only to stop within yards to find my computer wasn’t playing ball. It wouldn’t display the route for the day. After trying everything I could think of I called Shaun to see if he could find the error message on Google. After ten minutes of unsuccessful searching, the computer sparked back into life without any obvious reason. The route was showing and I was on my way. Riding out of Kendal I stopped at a busy looking petrol station / shop and bought some supplies for the day including a massive cheese bap, some home-made cakes, Red Bull and chocolate.

The rain was still falling as I left Kendal and my left knee and right Achilles tendon were really sore. Since day two I found that they usually wore in after about five or six miles and hoped today would be the same. After ten miles they were as sore as ever, giving me excruciating pain on every push of the pedal. Knowing I had Shap to climb I started panicking and called Shaun again. “I can’t do this” I told him, “I can’t even pedal on the flat, never mind the hill that’s coming”. There were a few tears, a few moments of silence and then a burst of enthusiasm and renewed energy. I was off again and this time the pain seemed less severe, easing off a bit more for every mile I peddled.

Shap hill is not very steep, although at about 1400ft it is high. The incline was maske 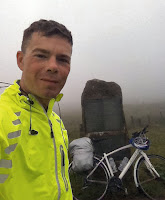 d by very low cloud and the continuing rain. With my head down, concentrating on a point about two metres in front of the bike, I dropped gears and worked my way up the hill, watching the ascent on my bike computer going up. 500ft… 600… 700… Road works near the summit seemed to appear from the murky cloud and just after I reached the summit, marked by a stone and plaque dedicated to the road users and builders. At the summit it actually stopped raining! I don’t know whether it was because I was above the cloud or whether the gods were taking pity on my previous five days of soakings, but the respite was appreciated as I sat behind the stone, sheltered from the bitterly cold blustery wind, eating Jaffa Cakes and downing my second tin of Red Bull. 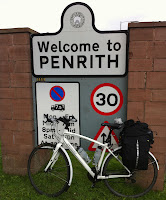 For the first time in this journey I used the thermal fleece jersey I had brought with me. At the summit of Shap the computer registered an air temperature of just 8 degrees. It could have been the middle of January up there despite it being more like 20 degrees back in Kendal. Wrapped in three layers and satisfied with my morning’s work I set off on the descent towards Penrith and Carlisle. Within a few minutes I was emerging from the clouds, back into what seemed like normal civilisation. After a fast descent of about two miles, the road levelled off and the rain started once again. I stopped for lunch in a bus shelter on the outskirts of Carlisle where I sat quite happily watching the rain and eating my sandwiches for a few minutes.

Upon heading out of my shelter it was a fast descent into Carlisle centre, about a mile before something caught my attention. My right pocket felt different… my bike shades… SHIT! Where were they? I took them off in the bus shelter and must have left them there. I really needed them so I had to turn round and pedal back up the hill to get them. When I got back to the bus shelter they weren’t there, despite looking in the same place a dozen times! I scanned around the floor and outside but nothing. I resigned myself to the fact that I’d have to buy some new ones in Carlisle and got back on the bike for my second descent into town. After about a hundred yards I saw something in the road. Yey! My shades! Still in one piece and unmarked despite being almost crushed by what must have been forty or fifty cars that had driven clear of them. Panic over!

After Carlisle I crossed the Scottish Border and into Gretna, where the rain really started a 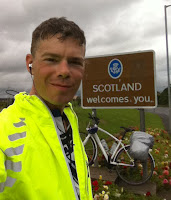 gain! It continued as I rode through Lockerbie and over the A701 at Moffat. This is where it got scary. The A701 'scenic' Edinburgh road should be beautiful in the middle of July. It climbs over 100 ft into the hills of southern Scotland. Today was nowhere near beautiful. All of my clothes were soaked and I was now climbing into colder, windier air. I could feel my body getting cold and there was nothing I could do because I had no dry clothes. There was nowhere to shelter, no pubs, houses, bus stops, nothing! I remembered the first signs of Hypothermia from my SCUBA diving days and confusion began when I noticed a red warning light flashing on my handlebars. Confusion because I didn't have a red warning light on my handlebars! It was there though, telling me to stop. The only choice I had was to try and find shelter to warm up. Luckily, a camper van approached and I flagged it down and explained my situation. The kind couple invited me in, made me coffee and could dry off my windproof jacket enough to get me to Broughton.
After a warm up and chat with the camper van couple I sprinted the last twenty miles and arrived to a warm house with a roaring fire and a hot meal of chicken and haggis.
Totals for the day:
Miles: 109.5
Avergage Speed: 13.2 mph
Maximum Speed: 35.5 mph
Total Ascent: 4583 ft
Calories Used: 6833