I am doing the Land's End to John O' Groats on my Specialized Sirrus 2010 Sport Hybrid bike. Below is a list of the additions and alterations I made to the bike in preparation for the event. 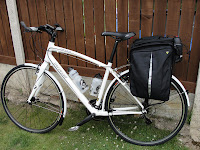 Here's the bike fully kitted up for the journey. The bike originally weighed just over 10kg and the additional weight comes in at about 9kg, 10kg with full water bottles. The mudguards and rack take away the sporty look of the bike but practicality takes importance here. 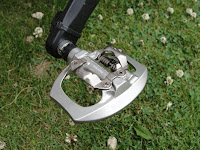 I've used Shimano Touring style clip-pedals and cleats over road bike pedals for the only reason that they are a lot easier to walk with. I'd read stories about them not been as good, some people saying they were too fixed and restrict movement. I have done about 500 miles in them and they're fine! There is a little flexibility in the position but they do the job and like I said before, the shoes are a lot better to walk about with than road shoes. 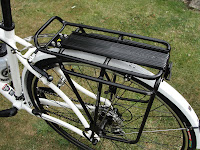 The decision on which type of rack and bag to use was the hardest af all the equipment. So many differing views and opinions from well seasoned cyclists had my head like jelly! The first thing I did was to lay all the equipment out on my bed and work out how much space I needed to pack it in, along with some spare space for food. Then I weighed it to make sure the rack I bought was strong enough. After all this, and after reading loads of reviews, I decided on a Topeak Super Tourist DX Rack. 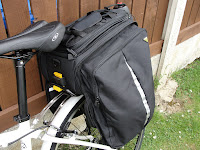 The main reason I chose the rack (above) was the fact that this bag is made specifically for the rack. It slides on and clips securely to the rack which means I don't have to worry about bungee cords or cable ties etc. The bag is a Topeak MTX Trunk Bag DX with Side Panniers. There's enough room inside for all of the equipment on my list plus some spare for any extra bits I pick up along the way / or for extra food supplies. I also bought a rainproof cover. 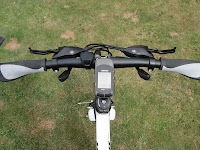 On the handlebars sits my GPS Garmin Edge 305 computer and my LED front light. I really wanted to use the Garmin Edge 705 but my budget wouldn't allow it! The 305 records everything I need and the only missing feature is the Sat Nav aspect, which I wanted rather than needed. The front light is a single flashng or static LED. Very bright and although I don't plan to travel after dark, its there just in case. 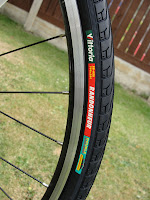 The first thing that came to my mind when choosing tyres was puncture resistance. Originally I planned on buying a pair of Continental Ultra Gator Skin tyres but when I saw them they seemed a bit thin despite they're claims of virtual puncture resistance. In the end my choice came down to a combination of the best overall reviews and recommendations. I have fitted a pair of Vittoria Randonneur City Tyres. They have really good tread and offered the best value for money combined with excellent puncture resistance.