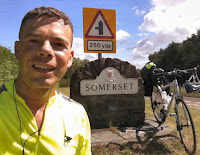 Unlike last night, I slept like a log in Okehampton. When I woke up my clothes were still hung in front if the open window to dry off properly and my bike computer and phone were charged up. The forecast was for showers this morning and heavier thunderstorms later in the afternoon. Joy! Luckily, the wind was still a strong South / South Westerly which meant I was in for some help from mother nature, even if I was going to get drenched! After a shower and breakfast I headed off. It's been a funny day as you'll soon read, and it started off with a mile and a half climb out of Okehampton. Not enjoyable when your legs haven't warmed up yet. I also decided today to stay off the A30 today, finding an very scenic alternative route (A382). I have to say that was the right decision. Despite some nasty hills, it was a more enjoyable morning as I headed towards Exeter through Dartmoor.

Most of the day was relatively uneventful. After leaving Exeter I steadily increased my av

erage speed and headed towards Somerset. I stopped for lunch in Bridgewater and then spent an enjoyable couple of hours with a tailwind and flat ground that brought me to the foot of the Mendip Hills. That's where the fun started!

The hills just seemed to keep climbing, and climbing, and climbing! To add to the fun, it started raining, then thundering, then really raining hard. The hills became fast flowing rivers and I was getting soaked to the skin. Should I stop? There wasn't any shelter! I had to keep moving and hope the worst of the storm passed. The hills kept coming, and despite not being able to see anything but sky around me the road just kept going up! At the top of the hill an EasyJet plane flew about 100 feet above me, landing at Bristol Airport. From there it was downhill into Bristol. The rain lasted an hour and a half, only easing as I entered Bristol centre. At least my bag cover and computer survived! The rest of me was completely sodden and my kit is now drying out in my room.