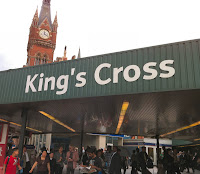 Well here I am. Sat in a beautiful B&B in Sennen, about a mile from Land's End. I set off at 10.30am this morning from Doncaster, travelling First Class all the way to Penzance. I booked the tickets in advance and only cost me about a hundred quid. It's been a long, but nice journey. The bike was stored in the front coach of the train from Doncaster and luckily First Class was the next coach so I only had about ten yards to walk. I had half of the coach to myself all the way to London with regular coffee and biscuits from the over-friendly trolly dolly. I think his name was Dierdre. It was a relatively quick journey to London at just under two hours. On arrival at Kings Cross I had to find Paddington station for my connection to Penzance. Jeeze! What a stress biking across London! It only took me 15 minutes but it felt like an hour! Busses and Taxis really don't give a toss about cyclists and just cut you off without warning. I've never cycled so defensively in my life.

Anyway, I arrived in one piece at Paddington with 20 minutes to spare. Paddington is a strange station. It seemed to be more like an underground bunker when I saw the main entrance. Unfortunately, this train's cycle storage was at the opposite end of the train so I had what felt like a half mile walk to and fro to lock my bike up. My seat was in the 'quiet' coach in First Class. I sat down and relaxed into the plush leather seat ready for five hours of travelling in peace. This was rudely spoiled when two guys in suits came bumbling through the carriage guffawing and talking loudly, taking the seats right behind me. I quickly cottoned on that they were politicians by the way they were talking. Mainly bollocks, but mentions of committees, business department and something about forty thousand jobs?!?

For the most part, after the Tory boys disembarked at Exeter, it was a really nice journey, despite being over five hours long! Beautiful rolling hills, aged forests and many marshes and tidal plains. The section between Exeter and Newton Abbott is especially beautiful. The railway runs right on the edge of the sea for miles, through towns like Exmouth and Dawlish. Spectacular in my opinion. The railway then moves slightly inland before passing through Plymouth, Bodmin and then winds it's way into Penzance. At Plymouth I was cheered along by Carole & Sam. (see picture).

For the last half hour of the journey I had the whole coach to myself. Not a soul in sight. I decided to change into my bike gear where I was sat. There was nobody about so why not? I stood up and took my trackie bottoms off, folded them and tucked them in my bag. I unfolded my cycle shorts and then I heard the carriage door open. One of the train cleaners walked in. I was stood in the carriage in my Armani pants and nothing else!!! I went bright red and tried explaining that I was just changing. The woman grinned and just said "Oooooooh, alright!" and stood watching while I hurriedly fumbled my cycle shorts on.

Upon arrival at Penzance the sun was shining. Most of the way down there had been heavy showers. It was really blustery though, from the South West, a headwind for my cycle to the B&B in Sennen, eight miles away. All I can say is that if the whole LeJog was like the 8 miles from Penzance to Sennen, I wouldn't dare attempt it! Talk about rollercoaster hills. I got a cramp after 5 miles, mainly due I think to been sat on the train all day (I hope!). I know that the first two days are going to be the worst but I hope my knees survive!

So I arrived at the B&B at 7.30pm. Wet and flustered after an hours riding into a 30mph headwind and a heavy shower for the last mile. I'm staying at Mayon Farmhouse, where a warm welcome and cream teas with scones were waiting for me. The room is gorgeous and overlooks the hills and sea. I'm having breakfast at 7.30am with a view of setting out at 8am. The weather forecast is for very heavy rain along with gales. Pile this on top of the 4200 feet I have to climb and I am sure that if I survive I will be able to claim myself as a hardcore LeJog'er!
Posted by Colin Dobson at 20:36