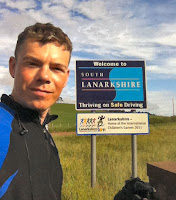 For the first time in the last six days, the sun was shining when I set off from Glenholm in Broughton. The forecast for the day was sunny spells and warmer temperatures of 20c. In addition, the route for today was, for the majority of the day, a gradual descent from the hills above Edinburgh down towards to foothills of the Cairngorms. On paper, it looked like a good day. As ever, I shouldn't have let my confidence show itself! After the torrential rain of yesterday, my bike computer and GPS were having problems again, the same as they did this time yesterday in Kendal. The route map would not display yet the computer seemed okay. I decided to give the computer some sun and followed the same road I left the evening before.

South Lanarkshire is quite beautiful. The sweeping hills in the morning sun were a delight to cycle. Long country lanes, single track with wild fields of heather and the odd farm with livestock grazing in the fields. The first village I came across was Biggar. It looks like a typical North Yorkshire type village with stone cobbled streets and a small but well stocked cent 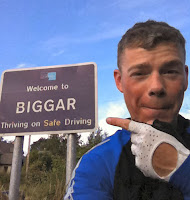 re with all the amenities you could need. I stopped at the convenience store for supplies of water, Ibupforen and biscuits before heading off back out into the country.

While taking the picture (on the right) a woman shouted me from further up the road. She was struggling to free a Sheep with it's head caught between the wire of the fence. I pedaled up and we both tried, unsuccessfully, to free the sheep who stubbornly would not move it's head to allow us to free it. Luckily, a nearby farmer had seen us and soon arrived gallantly on his quad bike. He managed to free the sheep within seconds, making me feel a bit useless! The farmer smiled and said something in such a strong Scottish accent that I didn't understand a word. He looked at me as if expecting an answer so I smiled and said goodbye! I got on the bike and daren't look back! 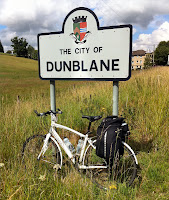 The next 40 miles or so were pretty fast going. With a nice southerly breeze behind me and the first bit of dry weather for six days, it felt pretty good. I flew through Falkirk and Grangemouth heading up towards Stirling. As much as I dislike cycling through towns and cities, Stirling was actually quite a nice place to see. It also saw the first railway crossing of the whole journey! I stopped by the river and had lunch before setting off thinking how good today was turning out to be. Heading out of Stirling the steep ascent led me onto the A9. This was another road that I had been warned about, yet took too little notice of in hindsight. The A9 starts off pretty harmless, It was fine as I cycled through Dunblane but then the problems started.

Like the A30 in the South West, the A9 is the main route through Scotland from Falkirk in the south all the way to Thurso on the north coast. Some of it is single lane traffic but a lot of it is very fast, busy dual carriageway with no bike lane, hard shoulder or path. The last place you would want to be on a cycle! As busy as it was, it wasn't that bad until I reached some roadworks near Gleneagles. The carriageway was down to one lane and there was definitely no room for bicycles. I was stuck, stranded in the middle of nowhere and my GPS was still not working from the rain the day before. I had to phone Shaun for help. 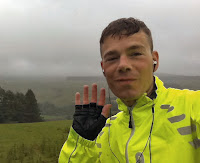 As if to make matters worse, the sunny day began to show signs of clouding over. Black clouds were building and the air was becoming humid. I could see showers falling a few miles to the west. Shaun called me back and suggested the only alternative route. The A882/887 scenic route. It took me into Pitlochry via a village called Crieff, but also over several large mountains, adding about 5 miles to my day and about 2000 ft to the daily ascent. I had no choice but to go for it.

No sooner had I set off, it started raining. The shower had grown and merged with other showers and the sunny day had turned into the wettest day so far! The sky was so heavy that it looked angry, almost black, much darker than I had ever seen before. I scrambled to get the bike bag covers on and unpack my waterproof jacket and lights before pedaling off in rain so hard it was hurting my face! For the second day in a row, weather warnings had been issued for torrential rain and I had no idea that I was heading straight into the centre of it.
I finally arrived in Pitlochry at just after 8pm. Almost three hours over my expected time but more than relieved to be out of the storms that had already caused floods around the village I had just reached. Within hours, the village had been cut off by flooding as the rains continued to hammer down.
Totals for the day:
Miles: 122.2
Average Speed: 12.8 mph
Maximum Speed: 36.4 mph
Total Ascent: 4499 ft
Calories Used: 7335