After a surprisingly peaceful night in my prison cell room in Bristol, I was keen to get on my way after a less than pleasant stay in B Wing. I left at 7.30am feeling quite buoyant about my 126 mile trek to Nantwich. The first two days had gone pretty well, and apart from my usual achy left knee I felt fine. I think that this early confidence was a bit premature for a couple of reasons. Firstly, the climb out of Bristol was a killer. Secondly, I just couldn't get into the 'zone'. Some people talk about this 'zone' and I completely agree with it's existence. On days one and two I hardly looked at my bike computer and the early miles passed quickly. Today was different, something wasn't right and the miles were really dragging during the morning. I stopped after about two miles to take a photo of the Severn Bridge before starting off again.

One thing I've learned is that however hard the going, however weak or unmotivated I feel, the best thing to do is to keep the wheels turning. It's easy to stop for a break but then it's even harder to get going than it was before. Today was definitely one if these days and after what seemed like an eternity

I still only had ten miles on the clock! After climbing out of Bristol I was soon in Gloucestershire, then Worcestershire and through into Staffordshire. That's when the real problem started!

I stopped for my 25 mile break. Got off the bike and had a wonder around, stretching my legs and shoulder, taking a drink and some biscuits. When I got back on the bike I clipped my left leg into the pedal, pushed down and SNAP! Imagine somebody pushing a knife into your knee and twisting it. That's what it felt like. Everytime I pressed down on the pedal that's what happened. I jumped off the bike and the pain disappeared as quick as it came on. Got back on and it did it again! I had to try and work it so off I went, making my right leg take most of the work. After a few minutes the pain eased off and I started peddling normally.

The day was really dragging now and the shock of what happened had me convinced that I would have to give up. With nothing but busy main roads and this pain, my mind was racing and I was getting more and more wound up. I stopped after an hour, got off the bike as before and got back on. It did it again! My heart sank. This was it. I'd failed and would have to give in. Even if I struggled through to a meeting 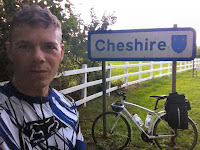 point for Shaun to pick me up I would never live this down. All I could think was failure! I was gutted.

I tried carrying on but didn't get far before I had to stop. I rang Shaun to tell him what had happened. When he answered I began to explain and then burst into tears. All of the stress, frustration and pain came out in floods of tears. We talked about giving up, Shaun stressing that I couldn't risk permanently damaging my knee. In the end it came down to sheer determination. The tears had released some stress and I actually felt better, more relaxed and found some strength to carry on, despite having another fifty miles to do!

As mysteriously as the pain came on, it disappeared as quickly. My knee ached the rest of the day and felt really sensitive, but I was able to get moving, albeit slower and having to be careful climbing hills. The miles were still slow but I was getting there. I eventually arrived just south of Nantwich after six pm. A beautiful B&B, tucked away on the edge of a forest and run by a very friendly couple, Linda & Richard, who gave me a warm welcome from the rain and soon had me fed and watered before a relaxing evening in front of the TV.